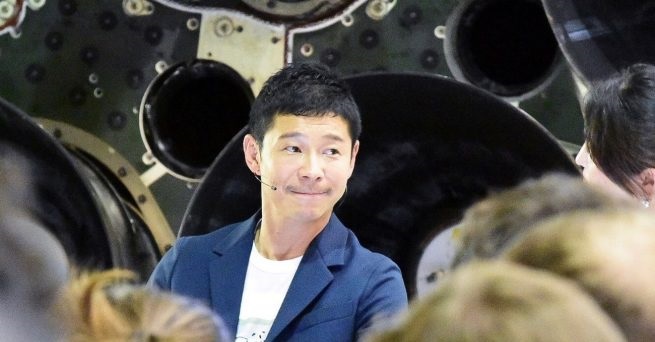 Japanese citizen Yusaku Maezawa has booked a journey to the Moon atop SpaceX’s yet-to-be-built Big Falcon Rocket and he wants to bring six to eight artists with him—for free. The Sept. 17, 2018, announcementwas made at the company’s headquarters and it marked another step in SpaceX’s quest to send people beyond Earth’s gravitational sphere of influence. Maezawa, a 42-year-old billionaire, has started an art project called #dearMoon. He is hoping to find up to eight artists and take them on a journey around the Moon as soon as 2023.

“Finally, I can tell you that I choose to go to the Moon!” Maezawa said after he walked onto the stage at SpaceX’s rocket factory in Hawthorne.

SpaceX is developing the 387-foot (118-meter) tall, fully reusable BFR as a successor to all of its rockets and spacecraft. The company is aiming to begin the first test “hops” sometime in late 2019 with the first full flights of the vehicle by the early 2020s.

During the announcement, SpaceX CEO Elon Musk said Maezawa is paying for a full BFR and has made a “significant” downpayment for a “non-trivial” amount of money. However, both Musk and Maezawa declined to disclose how much the Japanese billionaire is expected to spend.

“It’s a material percentage,” Musk said of the Maezawa’s financial contribution to the total development cost of the BFR, which is expected to range between $5 billion and $10 billion.

Maezawa is the 18th richest person in Japan, according to Forbes, with a net worth of 2.9 billion. He founded Zozotown, which is Japan’s largest fashion mall. The Japanese billionaire is also an art collector and the founder of Tokyo-based Contemporary Art Foundation, which opened in 2012.

He said he wants to take artists to the Moon in order to inspire humanity. During his presentation, he asked what famous artists would have created had they had the opportunity to view the Moon up close.

“If Pablo Picasso had been able to see the moon up-close, what kind of paintings would he have drawn? If John Lennon could have seen the curvature of the Earth, what kind of songs would he have written?” Maezawa asks on the #dearMoon website. “If they had gone to space, how would the world have looked today?”

The last organization to send humans to the Moon was NASA. The last of its Apollo missions to Earth’s nearest neighbor was achieved in December of 1972.

In terms of accomplishments, SpaceX is still at least a year away from achieving its objective of sending astronauts to low-Earth orbit (LEO) in its Crew Dragon spacecraft under NASA’s Commercial Crew Program.

Sending tourists to the Moon, even just a journey around the Moon without landing on its surface, would be a quantum leap beyond sending humans to LEO.

To accomplish this stunning milestone, the company is designing the BFR, which has an ultimate goal of facilitating the colonization of Mars.

To date, SpaceX has launched dozens of Falcon 9 rockets and has completed the inaugural flight of the Falcon Heavy variant of the rocket. The company stands alone in having the first stages of no fewer than 29 of those Falcon 9s return back to Earth (including a dual landing during the inaugural Falcon Heavy in February 2018).

Moreover, the company has sent a number cargo Dragon freighters to and from the International Space Station.

The Hawthorne, California-based company has developed a resume filled with commercial “firsts” that include the aforementioned Falcon first stage landings, the first commercially-produced spacecraft to travel to-and-from the International Space Station and more.

Musk has said that the BFR could be used to handle almost every sort of space mission that is currently conducted, as well as a few that have never been attempted before.

First announced in September 2016, the BFR has undergone several revisions. The most recent version calls for the vehicle to have a 180-foot (55-meter) long spaceship section that is 30 feet (9 meters) in diameter. Musk said it is designed to take 100 metric tons of payload to the surface of mars (after on-orbit refueling in LEO) inside a 35,000 cubic feet (1,000 cubic meter) pressurized volume.

The spaceship portion, which doubles as the BFR’s second stage, is now expected to have seven Raptor engines at its base and three landing legs. Two of those legs double as actuated fins. Additionally, there are two smaller actuated fins on the forward section of the ship.

The company is well into the process of building the first prototype. Musk said the first cylinder section of the BFR, which will be made with a carbon composite material, has been completed and dome and engines sections will be built soon.

Additionally, Raptor engine tests are continuing at the SpaceX’s test site in McGregor, Texas. However, much work still needs to be done to design, build, test and fly this giant rocket.

Maezawa said he hopes to work very closely with the SpaceX team between now and the planned launch. Meanwhile, he said he plans to search for and reach out to select artists to join him on his trip around the Moon.